The new Ferrari Roma is an ode to the past made with a refreshingly timeless silhouette. This newer look for Ferrari, headquartered in Maranello, is less over-the-top than their other models and pays tribute to the popular models from the 50s and 60s. It’s named after the country’s capital of Rome and seems to be made with cruising the countryside in mind.

Ferrari’s Roma exudes elegance and luxury. Less of a racing car, this model applies a new level of technology to an everyday cruiser. The Roma is a 2-door coupe, 2+2 passenger, and features a front-engine and rear-wheel drive.

The Roma’s exterior appearance features flowing lines, a sleek shape, and perforated grille. The design included slim headlights for a high-end feel, and futuristic tail lights to elevate the modern feel. The Roma measures 183.3 inches long, 77.7 inches wide, and 51.2 inches high. Its wheelbase comes in at 105.1 inches, and it has a trunk volume of approximately 10 cubic feet. The Roma weighs 3600 pounds — about 500 pounds more than the lightest luxury models on the market, with a few exceptions such as the 2020 Alfa Romeo 4C or the 2020 Fiat 124 Spider which are both about 1000 pounds lighter. All in all, it’s a sleek design, but definitely goes beyond Ferrari’s typical racing body.

The Roma’s engine has muscle and stamina, but doesn’t urge you to pass everyone on the road. The engine is a 612 horsepower twin-turbocharged and intercooled DOHC 3.9-liter 32 valve V-8. That’s 21 more horsepower than the Portofino model it was created to resemble. Compared to the Portofino, the Roma also has a better torque curve: 561 lb-ft at 3000 rpm. The Roma’s engine has an aluminum block and heads, as well as direct fuel injection. Driving this car gives you the chance to feel how its turbos spool up quickly, and the car races at the 7500 rpm redline.

As for handling, you will feel one with the Roma. One huge highlight is its 8-speed dual-clutch automatic that shifts quickly and easily. It is a little jumpy in higher gears, and you’ll feel the engine eager to enter its eighth speed. Those who have driven the car state that gear changes are smooth, but will also give an aggressive roar in between gears.

To put it simply, the Roma has impressive performance statistics when its cruiser-like body is taken into consideration. It goes from zero to 60 mph in about 3.1 seconds — about half a second slower than the fastest cars. It goes from zero to 100 mph in 6.8 seconds, and covers ¼ of a mile in just 11.0 seconds. Ferrari gave the ambiguous answer of over 199 mph for its top speed. 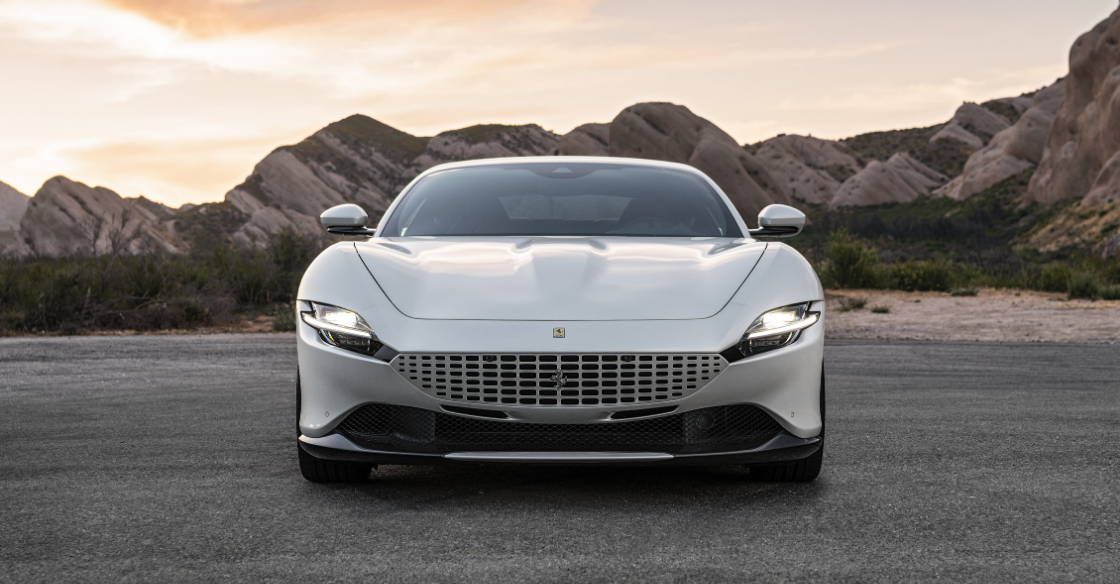 We’ll be honest: the Roma’s fuel economy is certainly lower than competitors’ models, many of which average well over 25 mpg. It’ll run you about 17 mpg in the city, 22 mpg on the highway, and 19 mpg in combined settings. With that said, being able to drive this car is certainly worth refilling the gas tank a little more often.

The two-door Roma is a four-seater. The interior is reported to have a minimally-sized center console due to the engine underneath. The two backseats offer just enough room for two adults if the journey is short, provided that the front seats aren’t pulled too far back.

Ferrari prioritizes the comfort of the driver in this grand tourer, and that’s clear in this ergonomic steering complex. The steering wheel has turn signals and stability-control mode controls on it. Behind the wheel is a large digital display with plenty of customizability. Drivers have found the Roma to have light-effort steering, but very accurate feedback. It’s precise behind the wheel, and it doesn’t require effort to feel it.

Always on the lookout for the next hot model, the Roma isn’t the only car we’re looking forward to. Alfa Romeo is releasing their 2021 GTV, a two-door coupe version of their popular Giulia Quadrifoglio, as well as the 2021 Tonale.

Lastly, Maserati’s 2021 MC20 is certainly on our radar. Offered in both coupe and convertible forms, it has a twin-turbo V-6 engine with 621 horsepower and appears to be Maserati’s attempt at reviving its brand.

The best part about Ferrari’s new Roma? That it’s coming to Ferrari of San Diego soon! All of our members at Fast Lane Drive are passionate car lovers, which means we’re just as excited as you are. To keep up with more exotic and luxury car releases, plus drive along our fleet of fast, fashionable cars, check out our site and get in touch today!

We drive our cars through the scenic routes of Southern California, even venturing to surrounding states for weekend members-only getaways. As always, we at FLD look forward to meeting other car enthusiasts, getting pumped for the next release, and seeing what new sports car models our members drive in next.